We eat the plastic that we throw!

This Friday at the fish market, people were also welcomed with two tables full of garbage that came from the sea. The sight of baskets full of plastic plugs, various packaging, styrofoam and numerous medical supplies (mostly syringes), hardly left anyone indifferent. The shocking installation of marine waste is only a small part of the waste generated which the Association for Nature, Environment and Sustainable Development Sunce gathered on the Zaglav beach on the island of Vis over the past year, as part of the international marine monitoring process – DeFishGear.

Waste in the sea is primarily a result of poor land-based waste management, where it comes from the wind, rivers, or by other means comes into the sea. How much waste there is in our blue pearl is still unknown and with this project, we are a step closer to the information. “We do not know how much waste there is, the source comes from, how much there it on the seabed, and how much on the coast and the sea surface. Since plastic never disappears, it only breaks into smaller pieces and then enters into all pores of the living system, it happens that the plastic we put in is eaten, “says biologist Mosor Prvan of the Sunce. 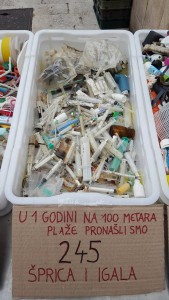 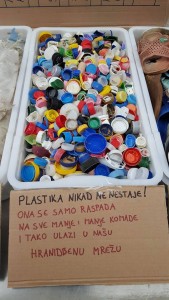 It seems that the problem in the Adriatic is higher than what they expected in the Sunce Association, especially in Central and Southern Dalmatia, where, due to sea currents, waste from the Adriatic neighbors is coming. “Data for one year tracking for the pilot location of the beach Zaglav on the island of Vis has been processed for now. Thus 42 224 pieces of various waste were collected and 97% of plastic was collected. Within 703 kilograms, most of it refers to various pieces of plastic, but there are also interesting details of over 5,000 ear sticks, suggesting a poor filtering system for sewer drains “, explains Prvan.

“Marine waste is a complex problem with the environment, safety, health, culture and economy, especially tourism and fisheries. That is why we want to raise the awareness of fishermen, citizens, and decision-makers about the impact of marine waste and make actions to effectively address this burning ecological problem, “said sociologist Pinija Poljaković from the Sunce Association.

Given the results of the research, we need to react promptly, they say from the Sunce Association. This can be done primarily by reducing waste generation, re-utilization and recycling, but also by constant pressure on politicians to improve the waste management system. Only then can we expect pure sea and coast, but also a clear conscience. 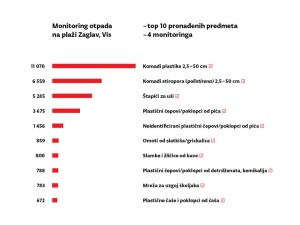 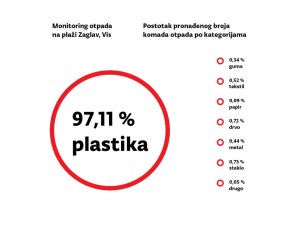 The Sunce Association, in cooperation with the Institute for Oceanography and Fisheries in Split, and within the framework of the IPA Adriatic CBC 2007-2013 of the project entitled “Marine Waste Management System in the Adriatic Region”, conducts a survey of marine waste status in the Adriatic. The project brings together multidisciplinary teams including the academic community, research institutes, national and local authorities as well as non-governmental organizations from all seven Adriatic Sea countries in order to strengthen co-operation and encourage joint and coordinated actions for the Adriatic without waste.