SUSHI DROP project: the construction of an underwater drone begins

The construction of an underwater drone shall begin soon within the scope of the SUSHI DROP project. Thanks to its innovative and non-invasive mode of operation, this drone could replace existing methods such as trawl nets which are expensive and devastating to the marine ecosystem. As part of the SUSHI DROP project, an underwater submersible, drone, or an unmanned underwater vehicle (UUV) would be constructed, which would allow for the study of the entire Adriatic with a focus on protected areas, especially within the Natura 2000[1] network.

The development of underwater drones began in 1955, and the first device similar to today’s one carrying the cute name “Poodle”, was built from parts of an underwater scooter. Given the many advantages that such a device offers, it was particularly useful to the navy during the Cold War and the arms race. It was used in deep-water rescue missions, object recoveries from the ocean floor, searches for bombs and wreckages. Surely the most famous wreckage is that of Titanic, in which James Cameron in 1995 was among the first explorers to enter using an underwater drone at the depth of 3,800 metres, which is shown in the movie carrying the same title.

The technological development led to the development of various types of underwater drones. The simplest categorisation could be based on the mode of operation, according to which they are divided into “ROV” – Remote Operated Vehicles and “AUV” – Autonomous Underwater Vehicles.

Remotely Operated Underwater Vehicles (ROV) are vehicles controlled by someone giving commands from a vessel, platform, or land. The commands are received through a neutrally buoyant cable which connects the vehicle to the surface. On the other side, Autonomous Underwater Vehicles (AUV) are submersibles that move almost independently following a designated route and completing set tasks. 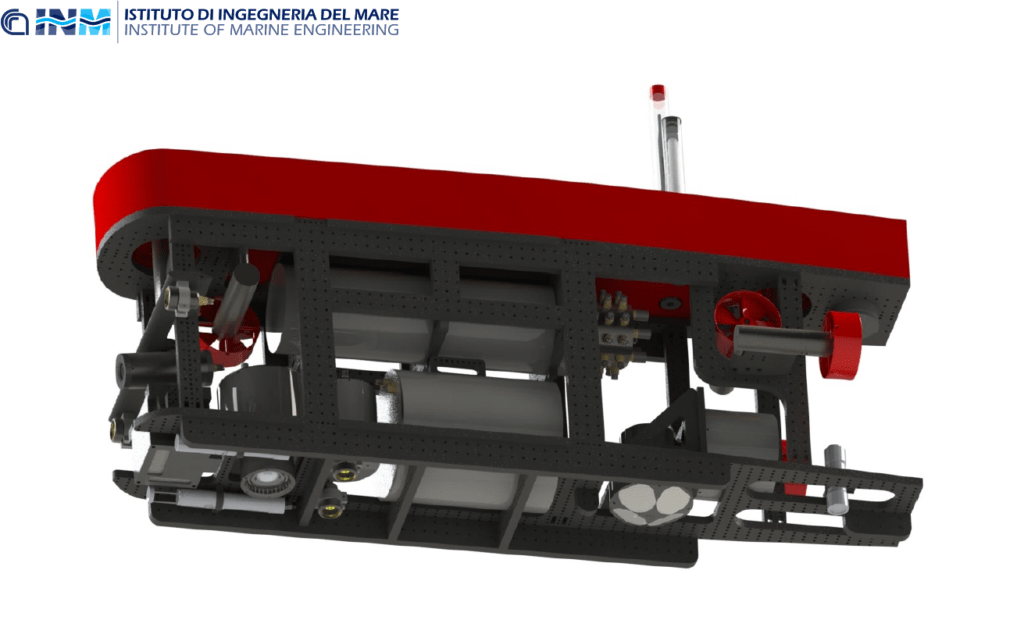 Lately, ROVs have grown closer to the general population due to their technical accessibility, which has contributed to their widespread presence and use. As such, ROVs or underwater drones can be divided according to their size into micro and mini, the weight of which can be between 3 and 15 kg. These models are most frequently used as an alternative to a diver for entering areas where a diver cannot physically fit, for e.g. in pipes and sewerage. Larger and more complex ones also exist, such as the drones for inspections, hard work, and excavations. Accordingly, the weight of these, which is around 3000 kg, and their capacity and operating depth are larger. They are frequently used in the hydrocarbon and oil exploration industry.

For scientific purposes, underwater drones exist in various shapes and sizes. Given that good video recordings are a fundamental component of most deep-water scientific research projects, such drones are usually equipped with high-intensity lighting systems and high-resolution cameras. Depending on the research being done, such drones can have sonars, magnetometers, and “arms” with the ability to sample water or sediment as well as instruments for measuring water quality, temperature, density, etc.

Given these options and in line with the goal of preserving the marine ecosystem, the construction of an underwater drone with adjusted features that combines the qualities of various types of submersibles will soon begin as part of the SUSHIDROP project. The drone, which will have innovative shape and characteristics, will be able to dive at a depth of up to 300 m and operate autonomously up to 8 hours. On top of its design features, it will be equipped with acoustic and optical devices for assessing the state of the environment and the fish stock, with emphasis on studying the habitats and breeding grounds of commercially important species.

Through the construction of this drone and the creation of a database, the SUSHIDROP project will enhance the quality of studies of the marine ecosystem but also allow for more efficient implementation of management plans – all with the aim of preserving the Adriatic Sea.

The project contractor is the University of Bologna – Marine Biology and Fisheries Laboratory, Fano, while five (5) additional partners from Italy and Croatia are involved in the project.

Latest News
Back to SUSHI DROP