1263 applications from citizens on Green Telephones of Croatia!

072 123 456 is the number of Green Phone, a service where citizens across Croatia can talk about various environmental issues and make suggestions, and callers on the phone, activists from civil society organizations, convey information to the relevant institutions.

Graph 2, Entries received by categories in 2016. 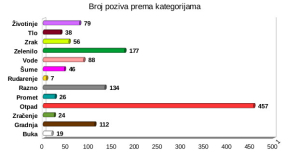 Citizens mostly take care of the improper disposal of waste or illegal waste landfills. A positive change in received applications has increased the number of inquiries about the possibilities of separate disposal of individual waste types.

177 (14.01%) citizens’ submissions were received within the category of greenery. In addition to very frequent applications from citizens in urban areas related to maintaining public green areas, the number of parcels on which the ambrosium is growing has increased. This contributes to the individual actions of local authorities calling on citizens to report such parcels.

In this period as many as 67.27% of the applications are anonymous, which suggests the fear of public outcry that is present in citizens.

The content of this text is solely the responsibility of Pan, Environmental and Nature Protection Association and can in no way be considered to reflect the views of the European Union and the Office of the Government of the Republic of Croatia for the Associations.